Historically, Leh served as the capital of the Himalayan kingdom of Ladakh, making it the second largest district in terms of area. Leh Palace, the royal palace in the city, was built by King Sengge Namgyal. Leh is connected to Srinagar in the southwest and to Manali in the south via the Leh-Manali Highway. 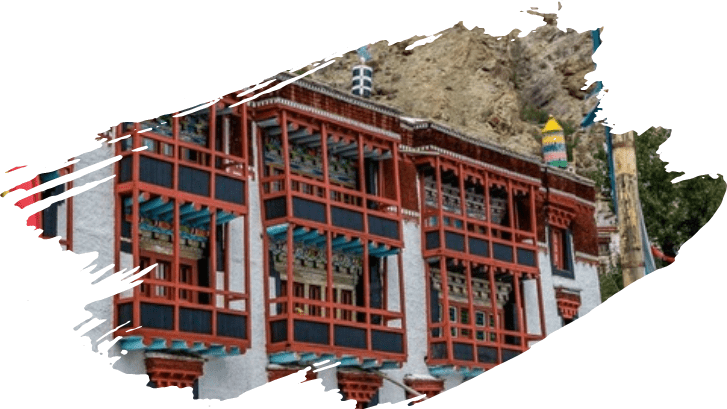 Upon arrival in Leh, Meet and assistance at the airport and transfer by car to Hotel. One is advised to take complete day rest for acclimitization. Ladakh at an altitude of 11500 Ft. is a land like no other. Bounded by two of the world’s mightiest mountain ranges, the Great Himalaya and the Karakoram, it lies athwart two others, the Ladakh range and the Zanskar range. Ladakh is also known as the land of passes.

Post breakfast Kali Mandir, Hall of Fame, Magnetic Hill, Pather Sahib, conflunce of river INDUS Local visit of Sankar Gompa: Located on a valley floor and is the home to Lamas who belong to yello sect and worship his Holiness – The Dalai Lama. Visit Shanti Stupa : a Buddhist religious monument built by Indian based Japanese Monk whose intention was to spread Buddhisim by building such stupas throughut the world. Evening is free for personal activities. Overnight Stay.

After early breakfast full day sightseeing of Shey,Thicksey & Hemis. Shey was the summer Palace of Ladakhi Kings and is where you can see the 36Ft. high statue of Buddha made of copper and covered with gold. The twelve storeyed monastery of Thicksey is situated in the most prominent of positions, lies on an island Mountain. Finally visit; Hemis : Farthest away from Leh, this is the wealthiest Monastery in Ladakh belonging to the Red Sect – it is here each summer that plays are held and Ladakhis from all parts of the country will visit Hemis. Evening return to Leh. overnight stay.

After early breakfast depart for Full Day trip to Pangong Lake over the Chang-la(5475 Mts. ) the highest lake in Ladakh and is flanked by massive peaks over 6500 Mts. High. The lake is 150 Kms. Long but is only 4 Kms. At its widest and extends almost in a straight line, way into Tibet, One rarely feels so close to nature and environment and the scenery is unforgettable. Return To Leh by afternoon enroute visit Farthest away from Leh, this is the wealthiest Monastery in Ladakh belonging to the Red Sect – it is here each summer that plays are held and Ladakhis from all parts of the country will visit Hemis. Overnight stay.

Post breakfast Check out from hotel in time to catch your return flight for your onward journey with lovely memories of this tour.

√  Assistance on Arrival.
√  A 24 – hour helpline.
√  Welcome Drink On Arrival at Hotel
√  Daily Breakfast and Dinner
√  Hotel Accommodation on Double sharing basis.
√  Travel throughout the entire journey in Ac car.
√  All taxes.

We offer the most competitive rates and the best deals for your travel needs.

With our experienced trip advisors, you will get the best support with quality services.

We work diligently round the clock to design the most enjoyable travel experiences for our customers.

Booking this amazing trip is just a few clicks away.

You can discuss your travel goals with an advisor immediately, and they will build your perfect holiday right away.